Our ultimate goal is to help you and your dog to be best friends for life. Using 100% British meat the treats are designed to train, treat & reward and are above all healthy for your four legged friend.

Supporting dog rescues began when a Whippet we named Grace was seen wandering through my village for at least a month. She was very timid, malnourished and she continued to wait for her owners to come back to collect her from where they left her. 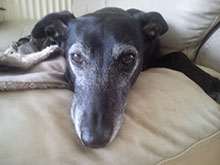 I had to gain her trust in me so wherever she was seen I would leave our treats for her. I had faith that one day soon she would associate the smell of the treats with me. That day finally came on the 7th September 2012. After a gruelling, two hour softly-softly approach I brought home our new house guest.

She was a very poorly girl, but with some good, wholesome food and more creature comforts than she could ever dream of she soon had a beautiful glossy coat that shone like a mirror. In no time at all she was thriving, she even promoted herself to chief taste tester. The bond with my other dogs and Grace was tremendous, they adored her and she them.

Sadly that bond was broken when Grace passed away on the 11th May 2013. We knew that Grace’s time with us would be limited as she had a large inoperable tumour. Grace is the reason we donate to charity - she is our inspiration and her legacy lives on.